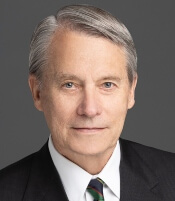 Michael M. Barron, along with Stephen Adler, co-founded Barron, Adler, Clough & Oddo, LLP more than 35 years ago.  Mr. Barron brought to the firm his years in litigation practice with the Attorney General's office, rising to the level of Chief of the Antitrust Division under Attorney General John Hill, and several years in private practice representing landowners in eminent domain litigation. Mr. Barron also served as Chief Counsel for the Human Resources Committee in the Texas Senate 63rd Legislature in 1973.

Mr. Barron represents landowners in statutory eminent domain cases, inverse condemnation cases and regulatory taking claims. Over the last 28 years, he has participated in several hundred special commissioners' hearings and numerous jury trials, and has lectured on eminent domain issues across the state of Texas.  He has also participated in legislative attempts to redraft the condemnation statutes to ensure more fairness to landowners.

Mr. Barron is a respected lecturer on the subject of eminent domain.  Recent professional engagements include:

Mr. Barron participates in a number of community programs and organizations. He is a member of the State Bar of Texas and a Life Fellow of the Texas Bar Association. He is also a member of the Frost National Bank Advisory Board of Directors.