On May 29, 2015, Kim Loessin moderated a panel at Bisnow's Future of Fort Bend County event at the Sugar Land Marriot Town Square. Officials from six of the biggest cities in Fort Bend County were represented at the event. The cities participating in this panel were: Stafford, Rosenberg, Sugar Land, Katy, Fulshear, and Richmond. Below are updates on various real estate and transportation projects happening in each respective city. 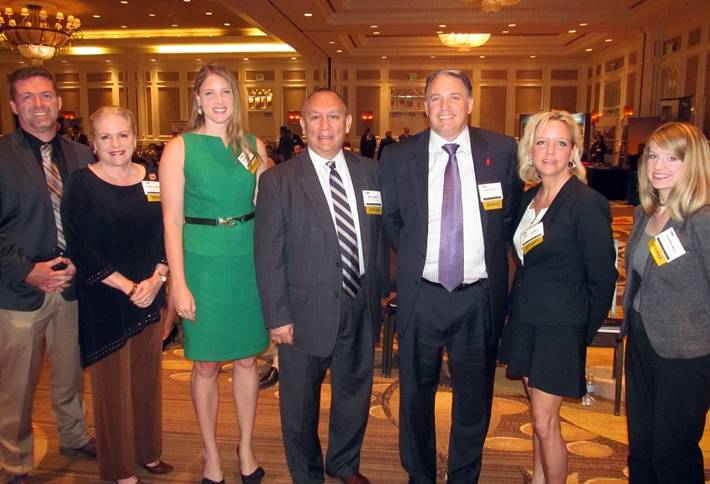 Stafford is expanding beyond its industrial roots, says City project administrator Cristin Emshoff. The City’s updating its comprehensive plan with a special focus on quality of life. That includes building up an arts and entertainment district around the Stafford Centre, and connecting it for pedestrians to HCC. Cristin expects the plan to be approved this fall. But Stafford’s not abandoning industrial; Tuesday night, it approved development of a 185k SF manufacturing building for Dishaka on Stafford Road.

City of Rosenberg assistant director Jeremy Heath is particularly excited about Texas State Technical College, which bought 80 acres at FM 2218 at FM 359 to build a 5,000-student campus. (That’s as large as its main campus in Waco, and the benefit to workforce development in the region should be a big draw for businesses.) Jeremy says one of Rosenberg’s biggest boons is its available land; 63% of its 100 square miles are undeveloped. Retail has been booming there (including the upcoming Paragon Outlets), so the team is working on building up light industrial to counterbalance it, especially in the Triple Fork industrial corridor, where Aldi’s putting in 650k SF.

Fuller Realty chairman Bill Smith shared details on Rosenberg Business Park. Fuller is developing those 184 acres on FM 2218. The infrastructure will be complete in four months, and Bill says the team has a couple of big companies under contract and a big one working now. They’re asking for $2.75/SF.

Sugar Land Mayor James Thompson said the city is working with the GLO to acquire the prison property, which it hopes to redevelop into a light industrial park. It also just broke ground on Brazos River Park, 100 acres of festival and park space. He also got some boasting in: Money Magazine called Sugar Land the best place in the US to find a job. City of Sugar Land director of economic development Jennifer May says Sugar Land has 25M SF of commercial development, the lowest tax rate in Texas, and one of the lowest crime rates in the US.

Planned Community Developers principal Don Janssen recently announced it’ll start building Lake Pointe One, a 150k SF office building. Why build in this weakened economy? Don says there’s an incredibly limited supply of new product—only 151k SF is in the dirt now, and 133k SF of it is already spoken for—and PCD won’t break ground without some pre-leasing. Plus, he thinks the site is compelling enough to defy a slump.

Colliers Fort Bend managing director Kolbe Curtice and Rubicon Realty Group principal Peter Jacob both work on Telfair (Kolbe leasing, Peter developing), one of the most buzzed-about parts of Sugar Land today. Kolbe says it’s the most fun project he’s ever done, and believes University and 59 will be the next key intersection in Fort Bend. As the City winds down its work on the performing arts center, he thinks it'll start focusing aggressively on building some hotel/conference facilities.

Katy’s been a hotbed of office and industrial development lately. Katy Area EDC CEO Lance LaCour says Ten West Crossing has completed its sixth industrial building, bringing it to 552k SF. Kobelco leased 100k SF there, and Katy is working with it to create a FTZ. Spec work is underway in Transwestern’s 419k SF at West Ten Business Park and Exeter/Archway’s 700k SF at Mason and Franz roads. As for office, Grandway West completed its first building and has filled it with engineering companies (only 10k SF is still available). It plans to build 780k SF on its 50-acre tract and is looking at second building now.

The City of Fulshear just did special purpose annexation of over 1,000 acres on the north part of its ETJ. Economic development director Cheryl Stalinsky says it’s an incredibly exciting opportunity for the city to build up its economic base, especially since the site includes Rooms to Go’s giant facility. Fulshear has come a long way since ’06, when it was the storage bin capital of Fort Bend. Now it’s a residential powerhouse—500 homes have sold there so far in 2015—and is No. 1 in the county for growth, education, household income and ad valorem tax.

Johnson Development has five active developments in Fort Bend, and two coming later. COO Doug Goff says Fulshear is a particularly great opportunity for quality master-planned communities; it recently bought a large tract there. Johnson is also targeting Richmond/Rosenberg. The firm is celebrating its 40th anniversary this year and has 12 communities under construction now, totaling 70,000 residential units and 10M SF of commercial space.

Richmond was intentionally quiet for years, City economic development director Rob Tobias says. But now it’s picking up the pace, including looking for mixed-use development on 500 acres on 59, building up small businesses in the area, and increasing both commercial activity and tourism in its historic district. He’s particularly pleased with some transportation projects underway (including the expansion of Williams Way, which will connect 59 to the historic district) because they’ll open up new areas.